RAJOURI, JANUARY 25: As a part of the weekly Block Diwas, District Administration Rajouri today organised a public outreach camp here at block Panjgrain. The Camp was presided over by the Deputy Commissioner, Vikas Kundal.

Among the issues raised by the public and their representatives during the event were sanctioning of funds under SSY and TSP inclusion of poor and needy people in BPL category, completion of Dhana Khankari road, construction of road from Hayat Pura to Mangal Nar; unconnected habitations to be covered under PMGSY, sanctioning of new PHCs etc.

Officers of different departments also educated the public about a number of schemes and programs being implemented by their departments in the district and motivated them to avail the necessary benefits of the same. They also replied to the queries raised by the public during the event.

The DC gave a patient hearing and assured the public that all their genuine concerns would be looked into for early redressal.

The DC asked the officers and PRI members to educate the common masses regarding the welfare initiatives so that maximum people could be benefitted.

The people were informed about the health screening of children in the block under Rashtriya Bal Swasthya Karyakram (RBSK). The DC asked the concerned officers to give wide publicity to the schedule to ensure coverage of maximum children under the program.

The DC further asked the concerned officers to take all possible measures to ensure that all eligible persons are enrolled for Aadhaar Card and SEHAT scheme. 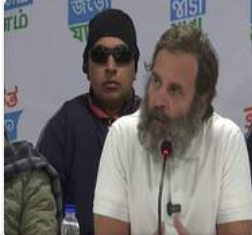 “Walk from Jammu to Lal Chowk, if situation is so good in J&K…” Rahul Gandhi dares Amit Shah