Ayodhya (Uttar Pradesh) [India], January 22 (ANI): Wrestling Federation of India’s (WFI) Annual General Body Meeting (AGM), which was supposed to start at 10 am today in Ayodhya, has been called off amid the ongoing battle between the wrestlers and its governing body in the country.

Following the wrestlers’ protest, this meeting was seen as being of utmost importance. The latest development comes after the central government on Saturday evening suspended WFI Assistant Secretary Vinod Tomar. Along with this, the activities of WFI were immediately banned till the completion of the investigation into the allegations of the wrestlers.

After late-night parleys with the protesting star grapplers, Union Sports Minister Anurag Thakur on Friday night announced that Brij Bhushan Sharan Singh will ‘step aside’ from the day-to-day affairs of the WFI till the seven-member ‘oversight committee’ led by Olympian MC Mary Kom completes its inquiry into the allegations against him.

The probe committee has been given a mandate of four weeks to submit its report, the minister added.

The wrestlers, who were protesting at Jantar Mantar, called of their protest after a meeting with Union Sports Minister Thakur on Friday.

In a late night presser on Friday, Thakur, who was accompanied by protesting wrestlers, said an Oversight Committee will be set up by the Ministry for the Wrestling Federation of India. The committee will inquire into the allegations made by prominent sportspersons of sexual misconduct, financial irregularities and administrative lapses and undertake day-to-day administration of the WFI. It will revisit the issues raised by players.

Thakur said the Oversight Committee will complete the enquiry in for weeks and till then, WFI President will step aside from the day-to-day functioning of the federation.

In its reply to Sports Ministry, WFI said it has enhanced the image of wrestling sport “nationally as well as internationally” under its present chief.

“The WFI is managed by an elected body as per its constitution and therefore there is no scope for arbitrariness and mismanagement of WFI by anyone individually including the President, WFI,” the federation said.

“The WFI in particular under the sitting President (3rd time) WFI has always acted keeping the best interest of Wrestlers in mind along with the best interest of India i.e. national interest as well and under the sitting president, WFI, the WFI has enhanced the image of wrestling sport nationally as well as internationally,” it added.
WFI said no official report has been submitted to it regarding any grievances about policy, rules, regulations, instructions.”

The Union government on Saturday decided to suspend all activities of the Wrestling Federation of India (WFI) until the Oversight Committee is formally appointed and takes over the day-to-day activities of the federation.
This includes the suspension of the ongoing ranking competition, and the return of entry fees taken from the participants for any ongoing activities.

Earlier on Saturday, Tomar termed the charges against the federation’s president Brij Bhushan Sharan Singh ‘baseless’. Speaking to ANI, Tomar said the wrestlers, who sat in a dharna at Delhi’s Jantar Mantar and levelled allegations of sexual harassment and financial impropriety against the WFI president, have not produced any evidence to support their claims.

“The allegations are baseless. It has been 3-4 days (since the wrestlers sat in protest) and they still haven’t produced any evidence. I have been associated with them for the past 12 years and I never came across any such incident or allegation,” Tomar told ANI. 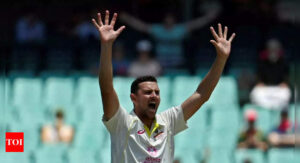