Mumbai (Maharashtra) [India], January 22 (ANI): Shah Rukh Khan fans are excited to see their favourite superstar back on screen again after a wait of four years.

While there’s still a couple of days left before they head to cinema halls to see him back in action, the superstar surprised his fans on Sunday evening by greeting them from his house Mannat’s roof! SRK greeted his hundreds and thousands of fans gathered outside his house and even shared the video on social media. In the video, we can see a red car getting stuck among the sea of fans outside SRK’s house in Mumbai.

Sharing the video on Instagram, SRK also passed a witty comment on how the red car got stuck in the middle. He wrote, “Thank you for a lovely Sunday evening… sorry but I hope ki laal gaadi waalon ne apni kursi ki peti baandh li thhi. Book your tickets to #Pathaan and I will see you there next…”

Talking about ‘Pathaan’, the film is a part of Aditya Chopra’s ambitious spy universe and has the biggest superstars of the country – Shah Rukh Khan, Deepika Padukone and John Abraham — in lead roles. The film also stars Dimple Kapadia and Ashutosh Rana in pivotal roles. 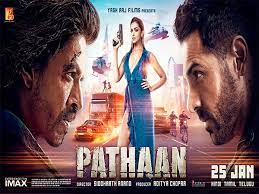