Jammu, Dec 31: J&K BJP General Secretary & Former minister Dr. Devinder Kumar Manyal, who inaugurated the 23rd SQAY National Championship, said that such sporting events where different categories of young sportspersons compete against one another not only promote camaraderie and coordination but also prepare them to play for the country.

The event was organized by Jammu & Kashmir SQAY Association, which is affiliated to SQAY Federation of India (SFI). The organization is recognized by the Ministry of Youth Affairs & Sports (Govt. of India) & Sports Authority of India. The championship will be held from 31st Dec to 2nd Jan 2023 and inauguration took place at Indoor Sports Stadium Bhagwati Nagar Jammu .

In his address, Dr Manyal laid emphasis on the importance of sports and said that Sports is an extremely important component for the overall development of our nation. India, in the last few years has made steady progress in the field of sports. He said that this is the time we inspire young talent, give them top-notch infrastructure and training of the highest level. Only then can India realize its dream of becoming a sports super power, he added.

Dr. Manyal said that under the Khelo India programme a strategy has been introduced to revive the sports culture in India at the grass-root level by building a strong framework for all sports played in our country and establish India as a great sporting nation. He said that our dedicated Prime Minister Narendra Modi is himself keen to develop the budding talent of the youngsters. He also mentioned that sports could also get rid of the menace of drug addiction from our society while playing crucial role in optimal health maintenance.

Dr. Manyal further wished best of luck to the organizers and the participants of the championship.

The founder of the SQAY Mir Nazir organized the event along with his team Mazhar Khan from Nagpur Maharashtra , Dr Parveen, Rajkumar  and others. The championship is held every year in different states and now this game is played in almost 35 countries. He told that about 700 children are participating in the championship from 22 States and UTs of the country being organized under Ministry of youth & sports. 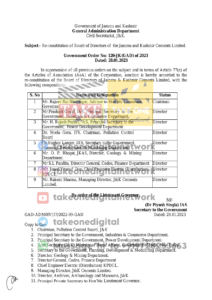 Re-constitution of Board of Directors of Jammu & Kashmir Cements Limited