These drug traffickers, as per notices issued, have been involved in the illicit trade of drugs with the motive of taking illegal proceeds. They have made investment in acquiring movable and immovable properties from the illegal proceeds from the drug trade.

Taking cognizance of their illegal activities, Additional District Magistrate Shopian has issued notices for declaring sources of their movable and immovable properties under Narcotic Drugs and Psychotic Substances Act, 1985.

The accused have been asked to attend the ADM office within 30 days. All these 03 persons belong to Zainapora tehsil.

They have been further asked to produce documents indicating their source of income, earnings or assets by means of which they have acquired properties and show why acquired properties may not be declared illegal and seized as per the provisions of the NDPS Act.

Earlier, similar notices were issued to 09 persons, 04 belonging to Shopian tehsil, 02 to Zainapora tehsil, 01 each from Hermain, Chitragam and Barbugh.

One held for drug peddling in Ganderbal 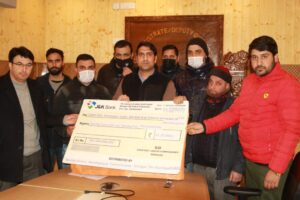